All time record for walking today as ( if mock Fitbit is to be believed) we did over 10 miles...and even cheated a bit by using the U-bahn. Trouble was, we decided as it was such a good day, we’d walk into the city and we did. We found a path that followed the river then a footbridge by the modern parliament buildings to get to Tiergarten/ Reichstag. 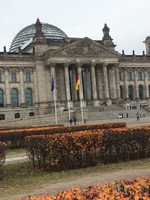 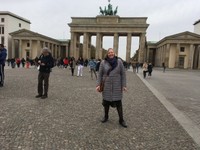 On we walked - in my case enjoying the posh shops and then wondering why compared with other cities, Berlin is very poor at providing public loos. However, we solved the problem with a welcome visit to Galeries Lafayette where the facilities are superb! We continued on to Potsdamer Platz and then towards Checkpoint Charlie. We spent some time at the Topographie des Terrors where there is the largest bit of wall preserved and the dreadful history of the rise of Nazism as it was the site of the gestapo headquarters. The place has an very sad atmosphere...must be bad as Keith commented on it and he never usually notices. The interpretation centre tells the story of the persecutions...so many millions murdered because they didn’t fit the “ideal” one way or another. I’m afraid I had to come out before completing the reading as I found it really harrowing. Even the segment of wall adds its own stories to compound the sense of mans inhumanity to man. 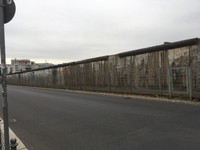 Then it was back to crowds, shopping, an unintentional visit to the site of Hitler’s bunker... it was on our way back to Galeries Lafayette ( not for shopping)! Sufficiently exhausted we hopped on the underground to return to our hotel. So much to see in Berlin...I’d like another visit, but I doubt it’s going to happen.

Posted by nanny0gg 02:27 Archived in Germany

Previous Next Table of contents

This blog requires you to be a logged in member of Travellerspoint to place comments.

If you aren't a member of Travellerspoint yet, you can join for free.